Community Statement: Together Against the Xenophobic Charter 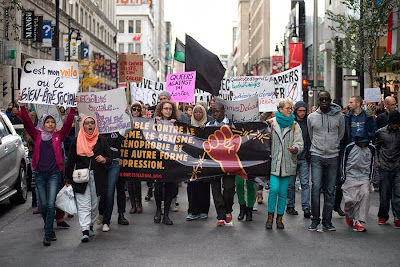 We are opposed to the proposed Quebec Charter of Values (now known as Bill 60).

From the outset, the proposed Charter and related debate fails to recognize that Quebec and Canada are built on stolen Indigenous land, and constituted through the dispossession and genocide of Indigenous peoples. We assert our solidarity and support with Indigenous struggles for self-determination and cultural integrity.

We are for equality between all genders but we also assert our support for struggles against patriarchy, sexism, homophobia, transphobia, racism and all forms of oppression.

We oppose those aspects of the Charter that attack the personal dignity and self-determination of our fellow Quebec residents, including their ability to work and survive in major sectors of the economy.

We assert that the introduction of the Charter of Values is both hypocritical and xenophobic. It is hypocritical because ostentatious symbols of one religion will remain untouched (specifically the Duplessis crucifix in the National Assembly as well as the cross on Mont-Royal). It is xenophobic because Charter supporters are appealing to sensationalized and false fears of other cultures and traditions, as part of an electoral calculation to win the votes of bigots.

We reject the monolithic portrayal of our communities and we assert the diversity of our cultures and traditions as well as our multiple identities.

We also reject the Charter as sexist as it is based on stereotypes of women who choose to wear the hijab. We reject the notion that women of faith need to be saved, and instead we support the women who are on the frontlines of their own struggles for liberation, as subjects, not objects or victims, of their own transformation.

We support struggles against poverty, precarity, social exclusion, assimilation, borders, racial profiling, sexism and gender violence. We unite to build across differences and struggle against all forms of oppression, whatever their source.

[To endorse this statement as an organization, please contact nooneisillegal@gmail.com]

Category:
Special projects
Project(s):
Against the Quebec Charter of Values
Related content:
articule Against the Charter

Support articule
with a donation